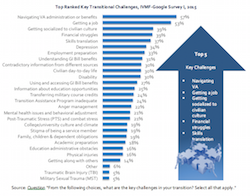 “We, as warfighters, yearn to give a narrative to our story, to the war we fought, to make sense of the madness.”

(Re-published from War on the Rocks, April 23, 2015) Recent discussions at military blogs and elsewhere raise important questions about moral injury and the Post-9/11 wars. With generous support from a Google Global Impact award, we surveyed over 8,400 recent warfighters on their military and post-service experiences. What we learned surprised us and revealed something troubling: warfighters’ experiences in the Post-9/11 wars and in post-service civilian life are too often missing from our national public consciousness and discourse. Despite a deluge of award-winning writing by recent veterans, including this generation’s invention of the war blog, sustained national interest in this war and its warfighters remains limited at best.

The first point we want to emphasize is, thus, one of missing perspectives. We have noticed an overarching lack of deep interest—even on the part of the public, federal agencies that collect data on servicemembers (for benefits allocation), and academic researchers—about warfighters’ perspectives on the Post-9/11 wars and their personal impacts. As Sebastian Bae writes, “despite a decade of war, today’s veterans remain faceless, marginalized from society—either heroes or villains.” Significantly, “‘thank you for your service,’” Bae adds, “represents the banality of society’s understanding of the nation’s wars and the men and women who fought them.”

This lack of in-depth, evidence-based inquiry is also—unfortunately—common across academia and in government. Scholars know a lot, for instance, about the “greatest generation” of World War II veterans, Korean and Vietnam—even Civil War veterans. But aside from health and wellness studies, Gulf War I and Post-9/11 veterans—a cohort facing some of the mostcomplex battlefields, unprecedented deployments, and the highest service-related disability rates (see Table 1)—have received far less attention by social scientists, in education data efforts or in programing on college campuses (with some key exceptions). Likewise, despite the rhetoric of “supporting our troops,” neither the VA, the Department of Education, nor the Department of Defense have modernized their data efforts to understand how veterans are doing in the military-to-civilian transition, where they go to school, or which career pathways they chose. We don’t even know the total number of U.S. veterans—federal datasets conflict over this baseline number, despite its importance for benefits and services (see Table 2). In short, we as a nation—in government, academia, and elsewhere—have not sufficiently explored the experiences of recent veterans and their meaning for national public discussions of war, service, and security today.

Secondly, we want to raise one underappreciated source of this often superficial approach to the Post-9/11 wars and its warfighters: a missing or faltering national security strategy for today’s complex, asymmetric conflicts, which may aggravate post-service transition challenges for veterans, including combat stress and moral injury. Moral injury, “the pain resulting from violating one’s moral foundation,” is increasingly seen as “the hallmark of today’s veterans.” While psychologists are still trying to define this idea and its impacts, Sebastian Bae’s informal description is again worth underscoring:

“Unlike Post-Traumatic Stress Disorder, moral injury does not stem from fear, but from struggling to reconcile a state of mind occurring in war, where moral clarity is impossible, and the morality society expects of us. To survive, we become someone we no longer recognize, accepting the inconceivable as the price of survival. So, guilt suffocates our voices, hiding stories we cannot share—society does not, or will not, understand.”

According to B.H. Liddel Hart, strategy is “the art of distributing and applying military means to fulfill the ends of policy.” But as Clausewitz knew well, policy objectives—not the military instruments of force to achieve them—are at the heart of strategic thinking, and this policy-oriented strategy itself is based on a narrative with “moral force” that then explains the need for a given war and its goals. Wars for modern, democracies are hard enough to prosecute: without a coherent strategic narrative with clear, worthwhile goals, the moral ambivalence that war (no matter how righteous) inevitably brings weighs most heavily on the “policy implementers,” the women and men of the armed forces tasked with effecting policymakers’ decisions and plans.

Given the importance of these two, missing, critical pieces of information—veterans’ perspectives, and a strategic narrative to explain these wars and our sacrifice—we have tried to structure our survey questions to fill in at least some of the gaps. In the process, we have gotten a glimpse, not only of the many transition challenges faced by today’s servicemembers, but their ongoing aspirations to contribute to public service beyond the military …