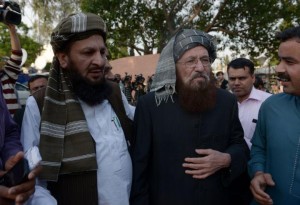 (Re-Published from Foreign Policy, May 15, 2014) On February 7, 2014, one day after the preliminary rounds of negotiations between the Pakistani government and representatives for the Pakistani Taliban, Maulana Abdul Aziz, the chief cleric at Islamabad’s Red Mosque and one of the Taliban’s negotiators, jeopardized the peace process by refusing the Pakistani government’s first condition: that all talks be held within the framework of the Pakistani constitution. “I won’t participate in talks until they include a clause about the imposition of Islamic law,” he said, indicating that the Taliban would only agree to negotiations if the Quran, not the Pakistani constitution, remained the guiding force behind the talks.

But, are these norms — set forth in the Pakistani constitution and Shari’a — so mutually exclusive? Do Islamists really have to worry about Shari’a missing from Pakistan’s constitution?

A lot has happened since that first, subsequently failed, formal meeting between the government and the Taliban negotiation team in the “journey for peace” held over three months ago in Islamabad — but this seeming impasse between “Shari’a or constitution” remains. One major incident in March, for example, an attack on a courthouse in Islamabad that killed 12 people, was claimed by the Ahrar-ul Hind, a loosely-associated Taliban faction. “Our fight will continue,” Asad Mansoor, a spokesman for the group, said in an interview: “We will carry on attacks on urban areas, police and markets until there is the complete imposition of Shari’a law.”

In many ways, the courthouse attack and the recent spate of violence throughout the country underscores by deed that which Aziz originally demanded — that the group’s interpretation of Shari’a replace the Pakistani constitution in setting the terms for negotiation. That is, both the ongoing Taliban attacks and these consistent demands highlight a core obstacle in Pakistani stability efforts that stretch far beyond the factional nature of the Taliban: the manipulation of Shari’a in the use of political violence. Aziz’s point of contention is in line with the well-known mantra of the Taliban and other Islamist organizations, including al Qaeda members across Iraq, Syria, and elsewhere: impose Shari’a, by the sword, if necessary.

When the ceasefire that started on March 1 ended last month, the issue of the constitution again took center-stage in discussions about whether to continue negotiations. Sharif told BBC Urdu that progress was being made and that it was “the number one condition that has to be met.” Meanwhile, some members of the Taliban’s negotiating team have said that the militant organization is ready to accept the constitution, in spite of the group’s past statements to the contrary.

Our own research on Muslim constitutions and modern conflict behavior by all Muslim-majority states (defined by their membership in the Organization of Islamic Cooperation, the largest intergovernmental organization behind the United Nations) suggests that Shari’a is not missing from Pakistan’s constitution. Indeed, our examination of Shari’a content in all modern Muslim state constitutions — what we call “sharia density” — including post-Arab Spring states’ new constitutions, indicates that Pakistan is, in fact, one of the most Shari’a-dense constitutions in the modern world. The amount of Shari’a content in Pakistan’s constitution — those articles that include Shari’a language, norms, principles, prohibitions, and guarantees — are surpassed only by the constitutions of Saudi Arabia (known as the basic law) and Iran …

Corri Zoli is a Research Assistant Professor at INSCT.

Emily Schneider (LAW ’13) is a research assistant in New America Foundation’s National Security Program. She is a graduate of INSCT’s Curricular Program in National Security and Counterterrorism Law and as an INSCT Research Assistant, she has helped build a database on Muslim state compliance with International Humanitarian Law.