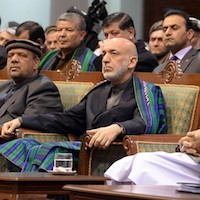 (Re-Published from the Washington Post, Jan. 2, 2014) As the original Dec. 31 deadline set by the United States passes, Afghan President Hamid Karzai is causing a potential setback in international and U.S. relations in his refusal to sign the Bilateral Security Agreement (BSA) — the long-awaited deal to right-size U.S. force commitments after December 2014 (from 47,000 to 10, 000) and provide a legal framework for U.S. training and counterterrorism operations.  Instead of the quick fix expected by all, including Karzai who had agreed to the deal, the BSA has become the latest object of the president’s political schemes as he prepares to leave office in the spring.

The Loya Jirga, the grand assembly of Afghan tribal leaders, convened on Nov. 21 to review the security agreement’s details offered unanimous support and asked for the president’s signature without delay. Karzai, present at the conclusion of the jirga’s four days of deliberation, refused to sign. As former Afghan President, parliament speaker, and chairman of the jirga Sibghatullah Mojaddedi said to Karzai: “You should sign it; this is our request, …and if the president does not sign it, I will promise you that, as I am a servant of this nation who has served these people for 40 to 50 years, I will resign and I will leave this country.” Mohaddedi has since left for Turkey.

In his most recent comments, two main sticking points appear to be driving Karzai’s delay: (1.) his demand for a total ban on counterterrorism (CT) raids by NATO forces, particularly as these raids include entering Afghan homes at night; and (2.) greater U.S. initiative to broker a peace process with the Taliban. The second issue is complicated by Karzai’s conspiratorial belief in U.S. “secret contacts” with the Taliban and his desire for a legacy as a strong leader outside U.S./foreign influence.

Constitutional Language & the Sanctity of the Home

Our focus—using social science data collected over the last two years—is on the first issue: the seemingly outsized emphasis on the sanctity of Afghan homes. While it’s no secret that negative Afghan public opinion swirls around civilian deaths from raids—rightfully so—Karzai’s antipathy toward raids, we believe, reflects something deeper, beyond his political machinations, embedded in norms shared across Muslim communities.

While there are many ways of identifying such norms and many challenges in moving beyond often individually-focused western notions of human rights, our research has examined the constitutional language of all Muslim states’ constitutions from 1947 forward. Thus far, we have examined each constitution for contributions from both Islamic law (or Shari’a) and modern international law, notably the Universal Declaration of Human Rights (UDHR), whose articles are prevalent among many constitutions. A closer examination of the constitutional language of the 57 Muslim states that belong to the Organization of Islamic Cooperation (OIC) shows that Karzai’s sensitivity to raids on homes—with an emphasis on the home’s inviolability—is a view widely shared by Muslim states.

Of the 57 states, all but two, Malaysia and Brunei, recognize the right to privacy in the home as a constitutional guarantee. Afghanistan’s constitution, Art. 38, holds: “property is immune from invasion,” and “no one, including the state, is allowed to enter or inspect a private residence without prior permission of the resident or holding a court order.” Iraq’s constitution holds that the “sanctity of the homes is inviolable and homes may not be entered, searched, or put in danger, except by a judicial decision, and in accordance with the law.” Pakistan’s constitution states that “the dignity of man and, subject to law, the privacy of home, shall be inviolable.” Saudi Arabia’s constitution (or the Basic law, adopted 1992) uses expressly religious language in Art. 37: “The home is sacrosanct and shall not be entered without the permission of the owner or be searched except in cases specified by statutes.”

In certain obvious ways such articles echo privacy protections, conventional across modern constitutions, and evident in Art. 12 of the UDHR:

“No one shall be subjected to arbitrary interference with his privacy, family, home or correspondence, nor to attacks upon his honour and reputation. Everyone has the right to the protection of the law against such interference or attacks.”
But this equation—the simplistic link to generic privacy in constitutions—would be limited and somewhat flawed, not the least because it ignores the evocative and often religious language (sanctity, sacrosanct, inviolable) attached to this right. In fact, this norm taps into values that offer distinctive insights across the Muslim world whose resonance gives clues for achieving postconflict stability in Afghanistan and elsewhere …