(Fox News | April 8, 2021) Vladimir Putin was reportedly so angered when President Joe Biden called him a “killer” in his first sit-down interview after taking office, the Russian president left his quarantine, got a COVID vaccination and moved 28,000 Russian troops to the border with Ukraine.

“It was really a shock. And it changed his behavior a lot,” argues Pavel Baev, a senior researcher at Norway’s International Peace Research Institute in Oslo.

Russian Bear bombers went into action, forcing NATO to scramble 10 jets to intercept the Russian warplanes flying over the North Atlantic Ocean last week, a rare show of force near the Arctic. On Monday, Putin quietly changed Russia’s constitution to allow him to stay in power until 2036. He would be 83 years old …

… Vice Admiral Robert Murrett is the deputy director of the Institute for National Security and Counterterrorism at Syracuse University and served as the director of the National Geospatial-Intelligence Agency for four years overseeing the Pentagon’s top secret spy satellites until 2010. He says Russia is developing a series of weapons that are very concerning to the U.S. military.

“The Arctic is a terrific shortcut, whether you’re in an aircraft, whether you’re underneath the surface of the ocean and also for intercontinental ballistic missile, this goes back to the Cold War,” said Murrett, who has spent his career watching Russian military movements.

The U.S. Air Force recently deployed 4 B-1 bombers to an Arctic base in Norway for the first time, another sign that Putin is getting the response he wants: attention and a diversion from his domestic opponents. 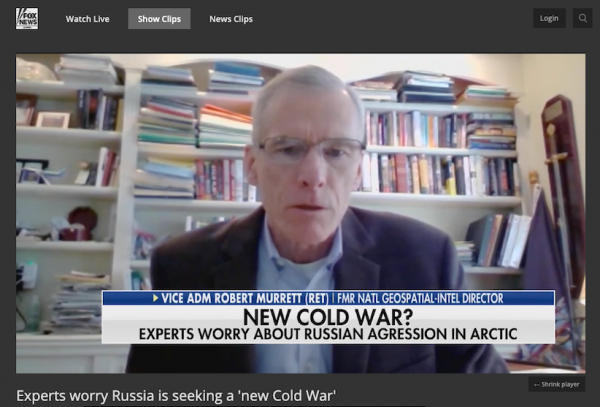