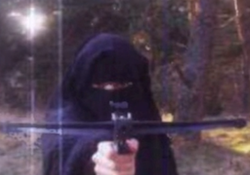 (Re-printed from CNN, Jan. 10, 2015) The hunt is on for Hayat Boumeddiene, the 26-year-old woman wanted over Thursday’s fatal shooting of a French policewoman. Early reports suggested she might have escaped Friday from a kosher grocery store in eastern Paris as French authorities mounted a rescue operation to free hostages being held there by Amedy Coulibaly, believed to be her boyfriend. However, CNN reports that no witness has publicly said the woman was actually at the scene of the siege, and now sources are saying she left France before the attack on the policewoman.

[pullquoteright]In many cases, these Western women are often going to Syria with the fantasy that there they will be able to marry the jihadist militant of their dreams.[/pullquoteright]Boumeddiene is believed to have left France for Turkey around January 2 with the final destination of Syria, according to French and Turkish sources.

Regardless, photographs of Boumeddiene published by Le Monde show her shooting what appears to be a crossbow in an all-enveloping black niqab. At first glance, this might appear puzzling. After all, jihadist militant organizations support Taliban-style rule, which allows women only a role at home.

However, we have seen a number of women from the West, including American citizens, taking an operational role in jihadist terrorist plots, including Colleen LaRose, a Caucasian-American 46-year-old from Pennsylvania, known as “Jihad Jane,” who traveled to Europe in 2009 to scope out an attack on Lars Vilks, a Swedish artist who had drawn a cartoon of the Prophet Mohammed’s head on the body of a dog.

European women have also played an operational role in jihadist terrorism. Muriel Degauque, a 38-year-old Belgian woman, died when she committed a suicide bombing in Iraq in 2005. And on May 14, 2010, Roshonara Choudhry, a 21-year-old British woman, stabbed Stephen Timms, her local member of Parliament, for his vote in support of the Iraq War. Timms survived the attack.

And there is also 31-year-old British citizen Samantha Lewthwaite, who is, according to Interpol, “wanted by Kenya on charges of being in possession of explosives and conspiracy to commit a felony dating back to December 2011.” The Kenyans believe she was part of a terrorist cell that was planning to carry out an attack in Kenya. Lewthwaite is the widow of one of the suicide attackers who set off bombs on London’s transportation system on July 7, 2005, killing 52 commuters.

All this underscores that the phenomenon of females joining the jihad has become far more common in the past four years, fueled by the Syrian war, which is drawing an unprecedented number of foreign militants from around the globe, including from the West.

According to data collected by New America, based on media reports and court documents, of the 455 individuals who have been publicly identified from around the world who have traveled or were arrested while attempting to travel to Syria to fight with a terrorist organization, 36 were women from the West. That’s 8%. And their average age is, astonishingly, only 18 years.

They hail from countries from around the West: Australia, Austria, Belgium, France, Germany, the Netherlands, Spain, Britain and the United States. And in many cases, these Western women are often going to Syria with the fantasy that there they will be able to marry the jihadist militant of their dreams …

Peter Bergen is CNN’s National Security Analyst, Vice President at New America Foundation, and Professor of Practice at Arizona State University. He is the author ofManhunt: The Ten-Year Search for bin Laden—From 9/11 to Abbottabad. Emily Schneider (LAW ’13) is a Research Associate at New America and a 2013 INSCT graduate.