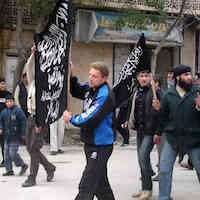 (Re-Published from Harvard Law School’s National Security Journal, Feb. 3, 2014)  In the midst of some of the worst infighting between Syrian opposition groups to date, al Qaeda Central leader, Ayman al-Zawahiri, called on Syrian armed groups to unite, stating, “you are the hope of our Islamic nation in establishing Islamic governance in the lands of Syria, the chosen land of jihad.” Aside from tactical aims, Zawahiri’s recently released video had twin effects: it revealed during the Geneva II Syrian “Peace” Conferences (on January 22 and 23-31) how serious the cleavages have become between rival jihadists in Syria’s ongoing civil war; and it lent credibility to Syrian President Bashar al-Assad’s otherwise hyperbolic claims that his country is beset by terrorists. Recent reports that al-Qaeda aligned rebels have gained control of Syria’s oil fields only deepen the sense that al-Qaeda is seizing the initiative in the Levant — and cutting ties with some groups—in the Levant.

Al-Nusra as Strategic Player in the Levant

These developments presage an emergent leadership style and strategy that has proven successful on this asymmetric battlefield. Abu Mohammed al-Golani, head of the al-Qaeda aligned Jabhat al-Nusra, has become not only a consensus-building leader in the midst of Syrian chaos, he has made progress in political coalition building by pressing opposition forces to establish an Islamic court to resolve their differences. In an audio recording released Jan. 7, 2014, Golani called for a ceasefire between armed forces—jihadists and arguably moderate coalition forces like the Islamic Front—and blamed current infighting on “incorrect policies” (by Islamic standards) adopted by the Islamic State of Iraq and Syria (ISIS), a rival al-Qaeda-linked group based in Iraq also fighting against the Assad regime. Such statements not only echo fighters’ complaints about ISIS, also known as the Islamic State of Iraq and the Levant or as-Shām (or ISIL).  They aid in the growing respect for al-Nusra, officially launched only in January 2012, as a disciplined force in a highly sectarian civil conflict and as “fair arbiters when dealing with corruption and social services.”

Jihadist infighting is, of course, nothing new in Syria, nor among Mideast insurgencies. Yet, Golani’s statements come at a pivotal moment as U.S. defense officials increasingly doubt the capacity of rebel coalition forces to form a post-Assad government and as the international community, particularly through the efforts of UN peace envoy Lakhdar Brahimi, tries to shepherd a transition process for Syria. What is also clear, however, is that rival jihadist forces are engaged in the same process, trying to establish political leverage, albeit through military means. ISIS’s involvement, with its recent successes in Fallujah and habit of flaunting al-Qaeda Central orders, affirms the now generalized concern that jihadists will both polarize Syria and destabilize Iraq. It would seem that al-Nusra sees itself as the most nimble of jihadists, and apparently Zawahiri agrees.

In fact, despite its own official affiliation with al-Qaeda, al-Nusra is backing other rebel groups against ISIS, causing yet another sectarian splintering of jihadist forces within an already dizzyingly complex multiparty civil war. Some analysts believe al-Nusra (with its Syrian majority) welcomes neither ISIS’s goal of merging Syria and Iraq into a single caliphate nor its support for an epic global jihad beyond ousting Assad. Others note the rivalry between Golani and ISIS-leader Abu Bakr al-Baghdadi, including Baghdadi’s recent refusal of Zawahiri’s orders to leave Syria for his home turf of Iraq. What is clear is that al-Nusra is distinguishing itself among jihadists by pushing for a coalitionist approach to the Syrian power vacuum and by gradually subjecting Syrians to strict, purist Shari’a rules over time. Most importantly, in melding religious interpretive differences and building an operational policy that translates into a viable strategy to defeat Assad, Golani is also creating a postconflict template using Shari’a rule of law.

Put another way, at issue in battlefield applications of Shari’a is political maneuverability. Golani’s idea of a battlefield dispute resolution mechanism is, at its core, politically pragmatic, all the better to leverage an Islamist endgame. Seasoned observers know well this familiar tension in jihadists circles between political pragmatism and ideological purity, where pragmatists are often mistaken at first for moderates. In fact, Romain Caillet points out the irony that many moderates regard ISIS as the more radical group even though al-Nusra is “today the official branch of al-Qaeda in the Levant.” Al-Nusra coalition efforts have succeeded in marginalizing ISIS in ways described by an Islamic Front representative recently to Al-Jazeera: ISIS is “guilty of the crimes and the arrogance of which it is being accused,” and insists on “acting as a ‘state’ rather than one faction among others,” and, thus, will “not submit to conflict resolution through impartial sharia tribunals like others do.” Another representative reiterated this point on Twitter: “We do not accept that the jihad is reduced to one single faction, just as we do not accept that any faction names itself a state.” In short, ISIS’s heavy-handed approach has polarized rebels, put off Syrians, and given al-Nusra an opportunity to redirect the conflict away from a combined Islamic state—to a stricter Islamic normative approach in Syria, one that is worrying Syrian jurists and lawyers alike. Though al-Nusra’s pragmatism may be gaining ground, its costs are still being felt on the battlefield, with estimates of over 1,000 rebels killed in the last several weeks of infighting, according to the Syrian Observatory for Human Rights.

Our own research in Muslim constitutions and modern conflict for all Muslim-majority states (defined by their membership in the Organization of Islamic Cooperation or OIC) indicates that though Golani’s pragmatic wish for a Shari’a court may seem like a stretch, it is neither unrealistic nor unprecedented—both at the state level and among nonstate armed groups in conflict settings. In fact, many Muslim states utilize Islamic law (or Shari’a) in their penal codes.

Our examination of all 57 Muslim state constitutions using data that we collected over the last two years found that 13 Muslim states constitutionally require that Shari’a constitute the main source of legislation. Another 3 states require Shari’a as the basis of all laws, and an additional 4 constitutions state that the state is based on Islamic principles. Of these 20 states, 7 states have additional constitutional language that specifically requires all penal laws, regulations, or sentencing to be based on Shari’a criteria. Syria is one of those countries, along with Iran, Malaysia, Pakistan, Saudi Arabia, Sudan, and Yemen. Moreover, 5 countries—Malaysia, Mauritania, Pakistan, Saudi Arabia, and Yemen—explicitly state that laws or decisions by legislative councils cannot be contrary to Islam, and Islamic law cannot be abridged by domestic law. Likewise, the constitutions of Egypt (2012), the Gambia, Iran, Jordan, Malaysia, Nigeria, Pakistan, and Saudi Arabia establish Shari’a courts for general adjudication. In another 7 countries, the constitution requires legal practitioners or judges in Shari’a courts to be Muslim and follow the Shari’a …

Corri Zoli is a Research Assistant Professor at INSCT.

Emily Schneider (LAW ’13) is a research assistant in New America Foundation’s National Security Program. She is a graduate of INSCT’s Curricular Program in National Security and Counterterrorism Law and as an INSCT Research Assistant, she has helped build a database on Muslim state compliance with International Humanitarian Law.