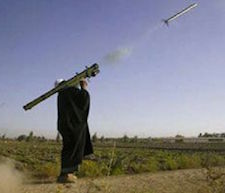 (Re-published from Small Wars Journal, May 13, 2015) A discussion with Emma Sky, the author of the just published book The Unraveling: High Hopes and Missed Opportunities in Iraq (Public Affairs, 2015).

SWJ: What prepared you for this Gertrude Bell kind of journey, for the role of the accidental counterinsurgent operating in a field where 80% is about politics (as Galula would remind us), doing a job where you had to “be more of a missionary than a soldier” (as one officer said)?

Emma Sky: When I went out in Iraq, the first time in 2003, I was not at all read or versed in counterinsurgency. It was not something that I was interested in or thought about, I had never worked with militaries. My background was in development and I had spent a decade working in Israel and Palestine and when you work in development and conflict mediation, people are very much at the center of what you do. The way I framed things had more to do with how the environment shapes people’s behavior. I think we are all products of our environments. If you change the environment, people’s behavior will change. This is the background that I came with. Everybody you meet, how you treat them, will affect whether they are your friend or your enemy. This is generally my approach to life.

SWJ: If I understand well the book, my impression is that you are at the other side of the spectrum from Rory Stewart who is highly critical about COIN and grandiose nation-building schemes. But there are times when we may need to embrace nation-building or state building. In this sense what are some of the necessary lessons that we need to have in mind next time?

Emma Sky: I am not that different than Rory Stewart on this. Rory may be at the far end of the spectrum, but I am closer to him. I am not a believer in big nation building efforts. When we look to Iraq today there is nothing to be seen from a decade of our efforts. So you have to ask why. Why after spending billions of dollars is nothing to be seen from it? I think part of the problem is that we are looking for technical solutions to things that are inherently political. It is all about politics. You quoted Galula saying it is 80% politics. I would say it is 90-95% politics.

The violence is an extension of politics. People use violence to achieve political ends. The main problem that we had is how we frame the situation and we framed it in terms of good guys/bad guys so good guys would be put in power and the bad guys would be excluded. In reality it is a power struggle between different groups. Probably civil war is a more accurate term than insurgency, because insurgency assumes that the government is legitimate. Civil war is more of a competition between a vast array of groups for power and resources. What we saw in Iraq was that those excluded from power tried to bring down the whole new order that we introduced and those that we empowered basically extracted the resources of the state for their own purposes, subverted the democratic institutions that we introduced and used the security forces that we trained and equipped to go after their political rivals.

Our focus should be much more on peace agreements, mediating between the different groups, because if you don’t get that right all the technical assistance that you provide is worthless in the end. Look how much we spent training and equipping the Iraqi army and the first time they were really tested by the Islamic State they fled. This had to do with the leadership, the governance of the security forces, there was so much politicization, so much corruption, so much political interference that completely undermined the chain of command. So conducting more training, providing more equipment does not deal with the problem of the governance of the security forces. So the issues are mostly political. We had all these plans to develop ‘them’ as if they were the passive recipients of our benevolence – and we don’t pay enough attention to the politics. In Iraq and Afghanistan we could have done much more right from the beginning to broker inclusive peace agreements.

SWJ: There is a lot of discussion about ancient hatred in the Middle East these days. Is this concept explaining anything? There was a moment during the 1990s when the collapse of the former Yugoslavia and the successive ethnic wars were perceived through similar lenses. George Kennan himself used the metaphor during the 1990s to advise against a Western intervention in the Balkans.

Emma Sky: When you look to the history of a country like Iraq, most of their history people have lived together, peacefully, they haven’t gone through sectarian wars like we had in Europe. There was not a 30 years war as in Europe. When we arrived in Baghdad in 2003, 30% of the population was intermarried. We blame ‘ancient hatreds’ for the violence partly to absolve ourselves of any responsibility for what’s happened and partly out of ignorance. People don’t understand what is going on in the Middle East so it is easy to say that everything has to do with Sunni and Shia. It is a simplistic explanation.

When you look at the conflict today, it has definitely become much more sectarian, so there is a new dynamic in the region. But the root causes have to do with power and the shifts in the balance of power which was caused by the Iraq war and the way in which we left Iraq which gave the impression that Iran was the victor, that Iran has driven America out of Iraq. Previously it was Iraq that acted as a bulwark against Iran’s expansion and without a strong Iraq, Iran is projecting its power through the region. Iran and the Gulf states have been supporting extreme sectarian actors, turning local grievances over poor governance into proxy wars against each other. That is what made the Middle East more sectarian and led to the break down of societies that coexisted for centuries …

Octavian Manea (MAIR ’13) was a Fulbright Junior Scholar at SU Maxwell School and a 2013 recipient of a Certificate of Advanced Studies in Security Studies through INSCT.