An additional aspect of Syracuse University Institute for Security Policy and Law’s CAS in PCR graduate program is the David F. Everett Postconflict Reconstruction Speaker Series, which brings established, widely known PCR experts to SU to deliver a lecture and to meet with students in the certificate program. Link

Elections, Violence, and Apathy: Crisis in the Congo, with Jason Stearns Link

Director of the Congo Research Group at New York University Jason Stearns spoke at the Maxwell School on “Elections, Violence, and Apathy: Crisis in the Congo.” Stearns is author of Dancing in the Glory of Monsters: The Collapse of the Congo and the Great War of Africa, which is described as “A ‘tremendous,’ ‘intrepid’ history of the devastating war in the heart of Africa’s Congo.” 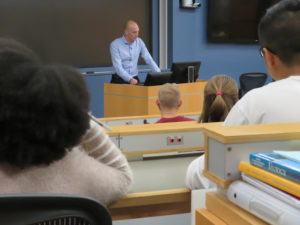 Erica de Bruin explained that in certain cases, peace treaties signed after internal strife and civil war can have the deleterious effect of causing coups d’etat down the line, especially when rebel soldiers are integrated with state security forces, an outcome that must be addressed in postconflict settings.

The conflict in Kashmir is among the long-standing political conflicts in the world. It has taken a heavy toll on lives, on sanity and on the idea of normalcy. The film Khoon Diy Baarav made over nine years, enters the vexed political scenario in Kashmir through the lives of families of the victims of enforced disappearances. It explores memory as a mode of resistance, constantly confronting reality and morphing from the personal to the political, the individual to the collective.

So, You Want to Work in International Development? What Every Job Hunter Should Know Link

Abro spoke to students about her experiences with her international development career; what students should expect when job hunting; and how best to take advantage of their experience, degree, and networks. Currently a Regional Security Adviser for the Peace Corps, Abro is a former Program Analyst at the International Criminal Investigative Training Assistance Program (ICITAP). 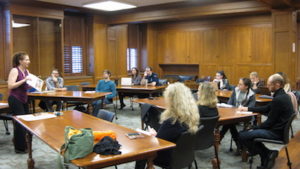 Corruption: Sand in the Gears of Afghan Reconstruction Link

Special Inspector General for Afghanistan Reconstruction John Sopko was a special guest of SPL on Oct. 20, 2016. Sopko was accompanied by his Congressional Liaison Alex Hackbarth (MPA/MAIR ’15), an SPL alumna. Speaking in the Maxwell School, Sopko discussed the oversight role of his organization, its efforts to control corruption in Afghanistan and to account for US aid dollars, and how, when it comes to tracking development efforts, “sunshine is the best disinfectant,” meaning that oversight and the press it generates provide disincentives for corrupt public officials and shady contractors. 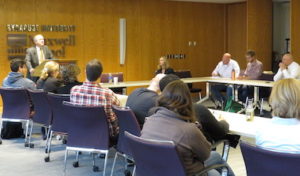 “Fight the Disease, Not Just the Symptom:” Why Good Governance is Essential to Countering Extremism Link

Sarah Chayes is a Senior Associate in the Democracy and Rule of Law Program and the South Asia Program at the Carnegie Endowment. Formerly special adviser to the chairman of the Joint Chiefs of Staff, she is an expert in South Asia policy, kleptocracy and anticorruption, and civil-military relations. She is working on correlations between acute public corruption and the rise of militant extremism.

A former reporter, she covered the fall of the Taliban for NPR, then left journalism to remain in Kandahar in order to contribute to the reconstruction of the country, living there almost continuously since December 2001. After running a nongovernmental organization founded by President Karzai’s brother Qayum, Chayes launched a manufacturing cooperativethat produces skin-care products for export from licit local agriculture. The goals were to help revive the region’s historic role in exporting fruit and its derivatives, promote sustainable development, and expand alternatives to the opium economy. Deeply embedded in the life of the city and fluent in Pashtu, Chayes gained a unique perspective on the unfolding war. 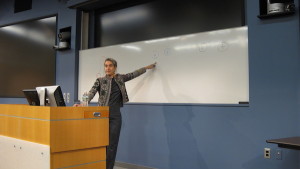 Ken Menkhaus will discuss his recent research on Somalia; the efforts to build a stable state in this troubled Horn of Africa country, despite ongoing conflict; how the “commodification of security sector work” challenges state-building; and the connection between security and development.

Menkhaus has extensive knowledge of these topics, having served as Special Political Advisor in the UN Operation in Somalia; as a visiting civilian professor at the US Army Peacekeeping Institute in 1994-1995; and as a visiting scholar at the US Army Strategic Studies Institute in 2011-2012. In 2004, he received a United States Institute of Peace grant for his research on armed conflict in the Horn of Africa. 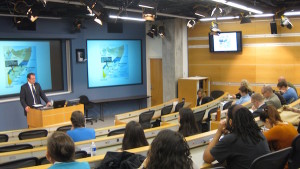 Col. Steven Henricks discussed Rule of Law missions he has been involved with during his military career, including his observations on tensions between various actors in these missions. Discrete examples from three different units with which he has worked lead to a series of “lessons learned.” He explained how his experiences highlight a need to re-focus Rule of Law efforts with more emphasis on local sensitivities. 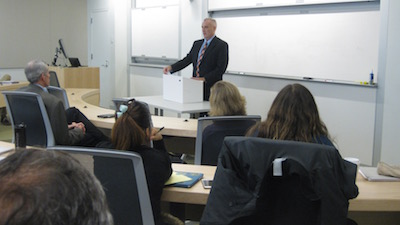 Pirates & Militants & Smugglers: What I Did On My (Latest) USG Vacation Link

Beth Cole was appointed as the Director of the Office of Civil-Military Cooperation at the US Agency for International Development (USAID) by President Barack Obama in 2012.  In this capacity, she is responsible for managing the relationship between USAID and the US Department of Defense. Cole directs a 47-member staff of Senior Development Advisors posted to the five geographic combatant commands, Special Operations Command, and the Pentagon, as well as military liaisons posted to USAID from the Commands and the Services and a civil and foreign service planning and support staff. 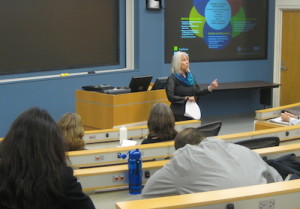 The Future of Stability Operations: Lessons from Afghanistan for Syria, Ukraine, and Beyond Link

Dr. Paul D. Miller is the Associate Director of the Clements Center for History, Strategy, and Statecraft at The University of Texas at Austin.  Previously, he was political scientist in the National Security Research Division at the RAND Corporation. He served as Director for Afghanistan and Pakistan on the National Security Council staff from 2007 through September 2009. Prior to joining RAND, Miller was an assistant professor at the National Defense University in Washington, D.C., where he developed and directed the College of International Security Affairs’ South and Central Asia Program. 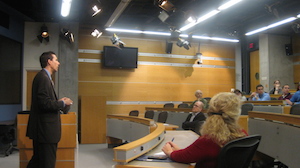 Greening in the Red Zone Link

Keith Tidball, Senior Extension Associate in Cornell University’s Department of Natural Resources, asserts that creating and accessing green spaces confers resilience and recovery in systems disrupted by conflict or disaster. Tidball is the co-editor of Greening in the Red Zone, an edited volume that provides evidence for this assertion through cases studies from Afghanistan, Soweto, New Orleans, Kenya, Cameroon, Cyprus, and Bosnia-Herzegovina. 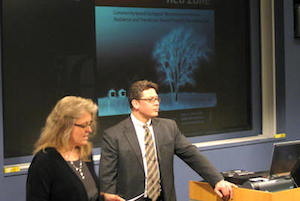 Legal Advice in a Combat Zone: Supporting the Army in Multinational/Joint Forces Combat and Peacekeeping Operations and the Bilateral Security Agreement Link

COL James McKee discussed his recent experience as the Deputy Staff Judge Advocate of US Forces-Afghanistan, his role in drafting the Bilateral Security Agreement between the US and Afghanistan, and his work with Deputy US Ambassador James Warlick’s negotiating team. 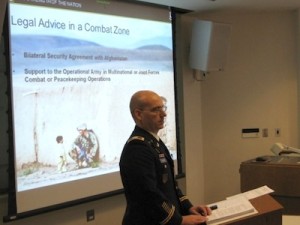 Morgan Courtney is the Burma (Myanmar) Engagement Lead at the Bureau of Conflict and Stabilization Operations at the US Department of State (DOS), where she manages a team of conflict specialists in the field and in Washington who focus on peace, conflict, and reconciliation in Burma.

Before this appointment, she served as the Special Assistant to the Special Representative and Policy Coordinator for Burma at the DOS, where she handled a broad array of security, political, economic, and conflict/reconciliation issues at a critical point in Burma’s democratic transition. Before that, she served as a Special Assistant to the Chairman of the Joint Chiefs of Staff in the Chairman’s Action Group, where she helped to provide guidance on a range of issues, including Syria, the Asia-Pacific rebalance, women in combat, and security assistance reform.

Exposing One of Our Flanks: Failures in US Security Sector Reform in Afghanistan and Lessons for Future US Foreign Engagements Link

April 23, 2013 | Erik Leklem, Senior Advisor for Global Defense Reform in the Office of the Deputy Assistant Secretary of Defense for Partnership Strategy and Stability Operations

The success of US policy in Afghanistan and our reputation in the region is at risk, but in a mission area that is not widely understood: security ministry development and capacity building. Without capable, civilian-led security ministries, Afghanistan’s security forces may be exploited by malign actors, be less combat effective, and fracture along ethnic lines, especially after Transition in 2014.

Sedra directs all of CIGI’s Security Sector Governance Projects, which produce field-based research and analysis on numerous ongoing war-to-peace transitions, including those in Afghanistan, Burundi, Haiti, Southern Sudan and Timor-Leste. In addition to his work at CIGI, Mark is a research scholar in the University of Waterloo’s department of political science and a faculty member at the Balsillie School of International Affairs. He is a member of the International Security Sector Advisory Team, an initiative developed at the Geneva Centre for the Democratic Control of the Armed Forces.

A Crisis of Trust Link

April 5, 2012 | A Panel Discussion of the Challenges and Prospects for Sustained Security Force Assistance to Afghanistan

This panel of distinguished subject-matter experts reflected on their recent experiences working as embedded advisors to the Afghan National Security Forces (ANSF) and discuss what is necessary to salvage and regain the trust necessary for any long term strategic partnership and sustained security assistance beyond the projected end of combat operations in 2013.

Building the Rule of Law from the Bottom-Up Link

Feb. 15, 2012 | A Video-Teleconference with US Army Brigade Leaders and Afghan Prosecutors

Rojas was appointed Director of the World Food Programme’s New York Office in July 2009. Prior to this appointment, he was the WFP Regional Director for Latin America and the Caribbean. Earlier, he served as the WFP Representative to India and Regional Manager for Southeast Asia. Medrano previously served as Ambassador and Permanent Representative of Chile to the FAO, IFAD, and WFP in Rome, beginning in 1993 until 1998. Between 1995 and 1997, he was President of the World Committee on Food Security, where he presided over the preparations for the World Food Summit held in November 1996 in Rome, Italy.

SPL welcomed Afghan Governor Iqbal Azizi and Miguel Sapp for a discussion on the evolving nature of U.S. and Afghan partnerships.

God Grew Tired of Us Link

Building Capacity and Legitimacy in the Afghan Security Forces: Recent Experiences of the 10th Mountain Division in Afghanistan Link

A panel of key leaders from the 2-22 Infantry Battalion (1st Brigade, 10th Mountain Division, Fort Drum), which spent the last year mentoring, instructing, and advising members of the Afghan National Army (ANA) under the charge of the NATO Training Mission-Afghanistan. Members of the panel will share their recent lessons learned in building ANA capacity and legitimacy in the midst of a complex counterinsurgency.

The Role of NGOs in Postconflict Zones Link

The Power of Hope Link

The UN in Postconflict Countries: Mandates, Missions, and Minefields Link

Professor Tim Sisk discusses UN peace operations and what can be done to dramatically improve the capacity of the UN to more effectively address the challenges of consolidating peace after civil war.

Weak States and Global Threats: What Are the Connections? Link

Particularly since Sept. 11, 2001, it has been commonplace to assert that the main threats to the US and the world community emanate less from great powers than from weak and failing states. Yet surprisingly little empirical research has investigated the precise connections between weak governance in the developing world and today’s main transnational threats. Is it true that state fragility contributes to transnational spillovers like terrorism, WMD proliferation, organized crime, and infectious disease? What is the nature of these linkages—and what can be done about them?

Veronique Dudouet is a researcher at the Berghof Research Center for Constructive Conflict Management in Berlin, Germany. She will address the roles that rebel and insurgency movements play in the termination of armed conflicts and the building of a more peaceful and stable political and social order. Her presentation will draw on preliminary findings from an ongoing participatory action research project with members of various non-state groups around the globe.