In May 2016, continuing its collaboration with the UN Counter-Terrorism Committee Executive Directorate, SPL was invited to join The Prevention Project, directed by the Global Center on Cooperative Security. Link

The project aims to support UN member states’ efforts to deal holistically and constructively with citizens who travel to fight with extremist and terrorist organizations, by developing effective community-led and, where appropriate, legal and administrative rehabilitation and reintegration programs.

While the flow of FTFs to Iraq and Syria has slowed, returnees and the relocation of fighters from the conflict zones to other regions present a considerable threat to international security. The flow of returnees risks spreading the threat posed by individuals loyal to ISIL to new regions. In addition to calling for terrorist attacks on an international scale, terrorist organizations—including ISIL (Da’esh), Al-Qaida, Boko Haram and Al-Shabaab—have compensated for their territorial losses by expanding their presence to new areas. This session will focus on discussing challenges related to returning and relocating foreign terrorist fighters (FTFs).

Some Member States are concerned that the numbers of FTFs returning to their countries of origin, potentially intending to perpetrate attacks, in combination with those being radicalized to violence within those countries, present a growing challenge to national security. The purpose of this session is to share and discuss good practices in countering violent extremism (CVE), including the role of the media, civil and religious society, the business community and educational institutions to enhance dialogue and broaden understanding, and in promoting tolerance and coexistence, and in fostering an environment which is not conducive to incitement of terrorism.

Over recent years, the proportion of terrorist plots resulting in fatalities has increased, in part due to the activities of returning and relocating foreign terrorist fighters (FTFs), as well as due to the evolution in terrorists’ modus operandi, including: (i) their use of basic (legal and easily accessible) tools that reduce opportunities for detection and disruption; (ii) their emphasis on (often poorly protected) civilian targets; and (iii) their use of information and communications technologies (ICT), including encrypted messaging services, for terrorist purposes, including to remotely guide single-perpetrator terrorist attacks. The purpose of this session is to analyze and discuss challenges and good practices related to preventing terrorist acts against civilians.

Session IV: The Future of the Global Research Network Link

The purpose of this session is to assist CTED in its preparation of: (i) A list of specific trends, developments and issues that require further research and analysis; and (ii) An internal work plan for future engagement with members of the Network, with a view to developing further evidence-based research that can support the work of the Committee and CTED.

On April 28, 2017, students in ISPL Director of Research Corri Zoli’s National Security and Counterterrorism Research Center presented research findings in the workshop “Understanding Interdisciplinary Responses to International Terrorism & Violent Extremisms” at SU College of Law. The students’ work was the culmination of a semester-long partnership with Emory University, George Washington University, and the US Department of Homeland Security (DHS) Strategic Partnerships with Colleges and Universities.

Workshop topics included the role of the UN in crafting international counterterrorism policy; women’s leadership roles in terrorist organizations; the importance of anti-extremist K-12 educational programs; cross-cultural perspectives on CVE programs that work in other countries; the experience of vulnerable communities with CVE in the US; the challenge of implementing counterterrorist and counter-extremist laws and statutes; and the role of “hard” and “soft” power CVE mechanisms, including drones.

The photo shows law student Brittany Howell presenting on “Countering Foreign Terrorist Fighters: The Importance of Internal Security for Outlier Nations” in which she examined the CVE programs of Tunisia, Belgium, and Indonesia. Her conclusion was that Indonesia, in contrast to Belgium and Tunisia, presents one of the most successful CVE efforts, thanks to strong internal security measures that go above and beyond what UNSCR Resolution 2178 demands.

This capstone project began when ISPL Director William Banks and Zoli were tapped by DHS as subject matter experts, along with Emory Law Professor Laurie Blank and George Washington Center for Cyber and Homeland Security Deputy Director Seamus Hughes, to provide recommendations to Secretary John F. Kelly for improving strategic partnerships with colleges, universities, and the K-12 communities in fostering CVE-related academic research and programming. Students’ research toward developing these recommendations have been submitted to the DHS Academic Advisory Council and to Secretary Kelly.

The rehabilitation and reintegration of terrorism offenders, returned foreign (terrorist) fighters, and (suspected) violent extremists is among the most pressing, yet politically and legally complex, issues facing policymakers and practitioners focused on countering and preventing the spread of violent extremism.

This one-day workshop brings together a diverse group of civil society practitioners, policymakers, and issue experts to highlight the challenges and lessons learned from rehabilitation and reintegration programs. Participants will enumerate a series of practical recommendations for government and non-government stakeholders to consider as they seek enhance the effectiveness of this critical element of the CVE tool-kit. The discussion will help shape one core section of The Prevention Project final report.

An increasing number of countries are currently grappling with how to respond to the return of the estimated 30% of the some 30,000 people who have travelled from more than 100 countries to fight in Syria and Iraq or how to handle those individuals who choose to reject violent ideologies and defect from terrorist groups such as Boko Haram or al-Shabaab and rehabilitate and reintegrate them back into their communities.

There is growing recognition that not all returnees or defectors can nor should be prosecuted or otherwise handled by law enforcement or security services. A small but rising number of programs are now in place that provide “off ramps” for those individuals back into civilian life where it has been determined that they do not, or no longer, pose a threat to society and their communities.

Many countries still do not have in place programs tailored to effectively reintegrate former fighters either due to lack of political will and/or capacity at the national level; in some cases, existing programs are too small to meet the demand and in other instances they do not include the necessary involvement of community and religious leaders and other civil society partners whose participation is critical to facilitating reintegration into the relevant local community. Moreover, in many countries, counterterrorism and criminal justice legal frameworks, which have generally been expanded to include foreign terrorist fighters since the United Nations Security Council’s adoption of Resolution 2178, impede the ability of civil society leaders and NGOs to engage with and otherwise support the rehabilitation and reintegration back into society of returnees or “formers.”

Governments and civil society are seeking to advance more effective and comprehensive approaches to reduce engagement in and support for violent extremism worldwide—and in an increasing number of instances, they are seeking to involve “formers” or “defectors” in messaging or other campaigns to counter narratives. It is also the prevailing sense of the field that productive engagement with “formers” or “defectors” can lower recidivism rates by ensuring meaningful non-illicit livelihoods options. Moving towards these programs will require new or reformed legal frameworks to support the successful implementation of rehabilitation and reintegration programs tailored to meet the needs of the returnees or other terrorism offenders.

3:15 p.m. – 4:15 p.m. Session 5: Policy Landscape, Solutions: Legal and political solutions to overcome challenges identified: This session will highlight some of the policy and legal changes needed, at which levels of government, and through which mechanisms.

4:15 p.m. – 5 p.m. Session 6: Achieving legal and policy solutions: What will it take to secure these changes? Which actors are working to design/implement the changes/solutions? What more can be done to support them.

Each case study presenter will address the following questions:

International legal and policy architecture pertaining to The Prevention Project theme of rehabilitation and reintegration programs are critical yet legally and politically complex elements in the Countering Violent Extremism (CVE) tool-kit.

Firstly, ISPL representatives will begin by discussing the principal US federal law used to prosecute suspected terrorists and supporters—the so-called Material Support Statute (18 USC §2339B)—and its implications for CVE, specifically rehabilitation and reintegration efforts. The goal of this notoriously sweeping law is to prevent acts of terrorism by striking at financial and other support structures that help facilitate attacks.

Toward that end, the Material Support Statute makes it a crime to provide almost any sort of good or service to terrorists or designated terrorist organizations. They also will discuss judicial interpretations of the statute, in particular the US Supreme Court’s decision in Holder vs. Humanitarian Law Project, which held that providing a terrorist organization with training and instruction on how to resolve disputes peacefully and without violence count as prohibited material support. As we will see, that expansive interpretation has important implications not only for foreign terrorist fighters (FTFs) but also for those who use CVE strategies to address FTF problems.

This work includes findings on each of the cases of interest to the workshop (i.e., Nigeria, Kenya, Somalia, Canada, EU, US, and Kosovo). After outlining general results, patterns, and challenges, ISPL will discuss one solution area for stakeholders: making clearer domain (i.e., criminal law, civic engagement, military-CT) distinctions about when to use the right CVE tool for the right problem, and how to make tools work together.

As Eric Rosand (2016), Rosa Brooks (2016), and others note, since prevention strategies are often cheaper than military approaches, civil engagement, prevention, and off-ramping programs need to be taken seriously—but in ways that “tie” these approaches together in an overarching deradicalization law and policy architecture which applies similar tenets (i.e., extremism is a global, cross-cutting problem; it’s cause are multivariate, etc.) across domains.

Countering Violent Extremism: What Are the Key Challenges for the United Nations?

Does CVE Work? Lessons Learned From the Global Effort to Counter Violent Extremism

Under the guidance of ISPL Director William C. Banks and Director of Research Corri Zoli, students in the National Security and Counterterrorism Research Center, a working laboratory for law and other graduate students interested in contemporary security issues, worked on the following Countering Violent Extremist (CVE) projects:

Under the guidance of ISPL Director William C. Banks and Director of Research Corri Zoli, students in the National Security and Counterterrorism Research Center, a working laboratory for law and other graduate students interested in contemporary security issues, presented research on how UN member states from various regions are complying with UN Security Council Resolution 2178 (2014), which calls on member states to prevent the “recruiting, organizing, transporting, or equipping of individuals who travel to a State other than their States of residence or nationality for the purpose of the perpetration, planning of, or participation in terrorist acts.” The presentation was made at SU Law to visiting representatives of the UN Counter-Terrorism Committee Executive Directorate (CTED), including David Scharia, UN CTED Senior Legal Officer. A follow-up report is under development. 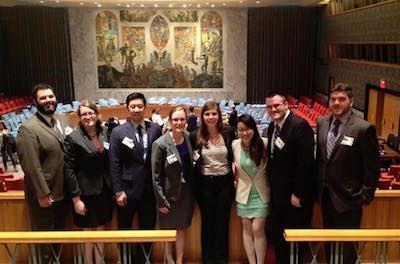