Syracuse University Institute for Security Policy and Law and the Center for Security and Emerging Technology at Georgetown University’s Walsh School of Foreign Service present a one-day virtual symposium on: Link

Biography
Matthew Mittelsteadt is an Artificial Intelligence Policy Fellow for the Institute for Security, Policy, and Law and a guest lecturer for the Syracuse University College of Law.

Previously he has conducted technology and data policy research for the RAND Corporation and the Autonomous Systems Policy Institute. He holds a Masters of Public Administration from the Maxwell School of Citizenship and Public Affairs and previously worked in healthcare technology. 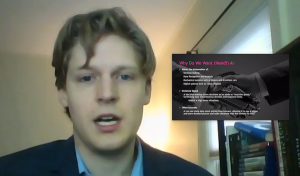 Biography
The Hon. James E. Baker is a tenured professor in the Syracuse University College of Law, with a courtesy appointment in the Maxwell School. Also serving as Director of the Syracuse University Institute for Security Policy and Law, Judge Baker teaches classes on national security law, emerging technologies and national security, ethics, leadership, intelligence, and the laws of war.

Judge Baker is one of the most highly regarded national security lawyers and policy advisors in the nation. Starting his career as an Infantry Officer in the US Marine Corps, Judge Baker subsequently joined the staff of Sen. Daniel Patrick Moynihan before serving the US Department of State, Foreign Intelligence Advisory Board, and National Security Council. Mostly notably, he served on the US Court of Appeals for the Armed Forces for 15 years—the last four as Chief Judge—before stepping down in 2015. The Court hears appeals arising under the Uniform Code of Military Justice, and its decisions are subject to review by the US Supreme Court. Judge Baker authored more than 250 opinions for the Court, addressing criminal law and procedure, rules of evidence, jurisdiction, and the First, Fourth, Fifth, and Sixth Amendments to the Constitution.

Since 2015, when he was appointed by President Barack Obama, Judge Baker has served as a Member of the Public Interest Declassification Board, established by Congress in 2000 to promote transparency in national security activities. He is also a Member of the ABA Rule of Law Initiative (ROLI) Board of Directors; a former Consultant for the Intelligence Advanced Research Projects Activity; and a former Chair of the American Bar Association’s Standing Committee on Law and National Security, which promotes public understanding of, and careers in, national security.

In addition to his exemplary public service, Judge Baker has been a teacher and scholar his entire career. He has taught as an Adjunct or Visiting Professor at Yale Law School (his alma mater, where he received a B.A. and J.D.); University of Iowa College of Law; University of Pittsburgh School of Law; Washington University School of Law; and the Georgetown University Law Center. His courses have included those on Managing National Security, Challenges in National Security, Federal Courts, and Ethics and Leadership. In 2017-2018, Judge Baker was Robert E. Wilhelm Fellow at MIT’s Center for International Studies, where he pursued scholarship on emerging technologies and artificial intelligence. Previous recipients of this prestigious fellowship include former UK Foreign Secretary David Miliband and Adm. William Fallon, former Commander of US Central Command. 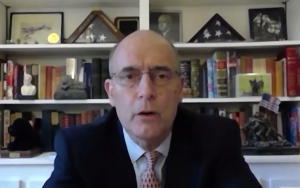 Biography
Dr. Margarita Konaev is a Research Fellow at Georgetown’s Center for Security and Emerging Technology (CSET) interested in military applications of AI and Russian military innovation. Previously, she was a Non-Resident Fellow with the Modern War Institute at West Point, a post-doctoral fellow at the Fletcher School of Law and Diplomacy and a post-doctoral fellow at the University of Pennsylvania’s Perry World House. Before joining CSET, she worked as a Senior Principal in the Marketing and Communications practice at Gartner.

Konaev’s research on international security, armed conflict, non-state actors and urban warfare in the Middle East, Russia and Eurasia has been published by the Journal of Strategic Studies, the Journal of Global Security Studies, Conflict Management and Peace Science, the French Institute of International Relations, the Bulletin of the Atomic Scientists, Lawfare, War on the Rocks, Modern War Institute, Foreign Policy Research Institute and a range of other outlets. She holds a Ph.D. in Political Science from the University of Notre Dame, an M.A. in Conflict Resolution from Georgetown University and a B.A. from Brandeis University.

Dr. Jason Stack is ONR’s Portfolio Manager for Autonomy where he leads ONR’s corporate strategy; manages the corresponding investment portfolio; and provides focus on transition, operationalization, and fielding for autonomy and autonomous unmanned systems. He also serves as the Director for the Ocean, Atmosphere, and Space Research Division where he is responsible for planning, execution, and management of an integrated research and technology development program supporting the Dept. of Navy’s maritime warfare areas and scientific research efforts.

Dr. Stack holds the MSE and Ph.D. degrees in electrical engineering from the Georgia Institute of Technology, an MBA from the Massachusetts Institute of Technology, and the BSE degree in electrical engineering from Mercer University. He holds over 40 publications in the fields of machine learning and autonomous systems and is a Senior Member of the IEEE.

Biography
Iben Yde is Assistant Professor in international and operational law at the Royal Danish defence College (RDDC), Institute for Military Technology and Head of the very newly established Center for Operational Law, RDDC. Her research focuses on the legal aspects of emerging technologies, with particular focus on AI and autonomous weapons systems.

Iben has served as legal advisor to the Admiral Danish Fleet and Royal Danish Dfenece command and has three operational deployments behind her. She serves as advisor in relation to national as well as international research and policy projects on emerging technologies and teaches and publishes widely on topics related to the law of armed conflict and military technology.

Biography
Lt. Col. John R. Cherry is the Deputy Chair and Military Professor at the Stockton Center for International Law at the US Naval War College (NWC) in Newport, RI. He was commissioned in the US Marine Corps in August 1997 and has served in a variety of assignments including Deputy Legal Counsel, Office of the Chairman of the Joint Chiefs of Staff; Staff Judge Advocate, 2d Marine Logistics Group; and Assistant Professor of International and Operational Law and Vice Chair, The Judge Advocate General’s Legal Center and School.

In 2004, he deployed to Guantanamo Bay, Cuba, serving as the forward Legal Advisor for the Combat Status Review Tribunals. In 2010, Cherry deployed to Delaram, Afghanistan, as the Staff Judge Advocate for 2d Marine Regiment/Regimental Combat Team-2. His focus areas include the laws of armed conflict, targeting operations, autonomy and artificial intelligence in armed conflict, and detention operations.

Cherry is the US NWC’s delegate to the CCW Lethal Autonomous Weapon Systems Group of Governmental Experts (LAWS GGE) and has been a member of the U.S. Delegation. In addition to his duties with the Stockton Center, Cherry is the president of the US Group of the International Society of Military Law and Law of War (ISMLLW). 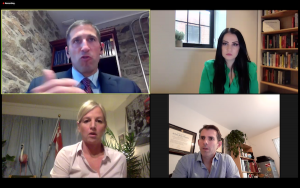 Biography
Tarun Chhabra is a senior fellow at the Center for Security and Emerging Technology at Georgetown University, and a non-resident fellow at the Brookings Institution. He previously worked on the National Security Council staff at the White House, in the Office of the Secretary of Defense at the Pentagon, and in the Executive Office of the United Nations Secretary General.

Many of his projects involve designing, building, integrating, testing, and evaluating various platforms and systems in tactical environments enabling him to fully understand the system life cycle process. His sponsors include a variety of organizations such as NAVSEA, WARCOM, SOCOM, Strategic Systems Program (SSP), NASA, and NAVAIR. Before working as a primary developer, he served as a Commissioned Officer in the United States Coast Guard where he conducted salvage engineering assessments and ship’s stability technical reviews for certification and compliance. His knowledge and skills have grown to where he now works on land, sea, air and space projects around the lab that involve developing autonomous systems.

Biography
Edward W. Felten is the Robert E. Kahn Professor of Computer Science and Public Affairs at Princeton University, and the founding Director of Princeton’s Center for Information Technology Policy. He serves as a member of the United States Privacy and Civil Liberties Oversight Board.

In 2015-2017 he served in the White House as Deputy U.S. Chief Technology Officer. In 2011-2012 he served as the first Chief Technologist at the US Federal Trade Commission. His research interests include emerging technologies, information security and privacy, and technology law and policy. He has published more than 170 papers in the research literature, and three books. He is a member of the National Academy of Engineering and the American Academy of Arts and Sciences and is a Fellow of the ACM.

Biography
Laurie Hobart teaches national security law courses at Syracuse University. She has worked as an Assistant General Counsel in the Intelligence Community, receiving a Harvard Heyman Fellowship for federal service; as an associate at King & Spalding LLP; and as a law clerk to the Hon. Charles F. Lettow of the US Court of Federal Claims. 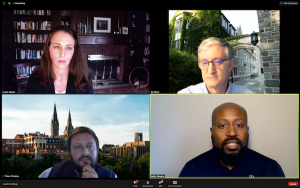 Biography
Gregory C. Allen is the Chief of Strategy and Communications at the Department of Defense Joint Artificial Intelligence Center (JAIC). At the JAIC, Allen advises on development and implementation of the DoD AI Strategy and is responsible for the JAIC’s communications and messaging.

Before joining the JAIC, Allen was an Adjunct Senior Fellow at the Center for a New American Security (CNAS) where he focused on the intersection of Artificial Intelligence, cybersecurity, robotics, space, and national security.

Before working at CNAS, Allen was the head of market and competitive strategy Blue Origin, a space technology manufacturer. Before that, he was a senior project manager at Avascent, a management consulting firm that provides corporate strategy advisory services to major technology firms.

Allen holds a joint M.P.P./M.B.A. degree from the Harvard Kennedy School of Government and the Harvard Business School.

Biography
Reggie Brothers is the CEO of NuWave Solutions, a recognized leader in providing anticipatory intelligence and advanced data analytics to the defense, intelligence and private sectors and a Distinguished Fellow at Georgetown’s Center for Security and Emerging Technology (CSET).

Most recently, Dr. Brothers was CTO of Peraton and Principal with the Chertoff Group. Prior to that, he served as Under Secretary for Science and Technology at the U.S. Department of Homeland Security, where he was responsible for a science and technology portfolio that included basic and applied research, development, demonstration, testing and evaluation. From 2011 to 2014, Dr. Brothers served as Deputy Assistant Secretary of Defense for Research at the Department of Defense. In this position, he was responsible for policy and oversight of the Department’s science and technology programs and laboratories. 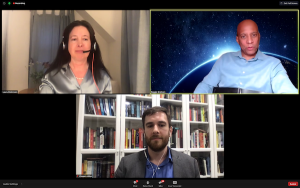 Where Are We Headed? Link

Biography
Jason Matheny is Founding Director of Georgetown’s Center for Security and Emerging Technology (CSET), and a Commissioner on the National Security Commission on Artificial Intelligence, to which he was appointed by Congress in 2018.

Previously, he was Assistant Director of National Intelligence, and Director of IARPA, responsible for the development of breakthrough technologies for the U.S. intelligence community. Before IARPA, he worked at Oxford University, the World Bank, the Applied Physics Laboratory, the Center for Biosecurity, and Princeton University, and was the co-founder of two biotechnology companies. 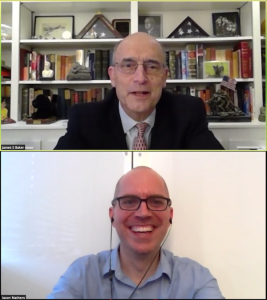 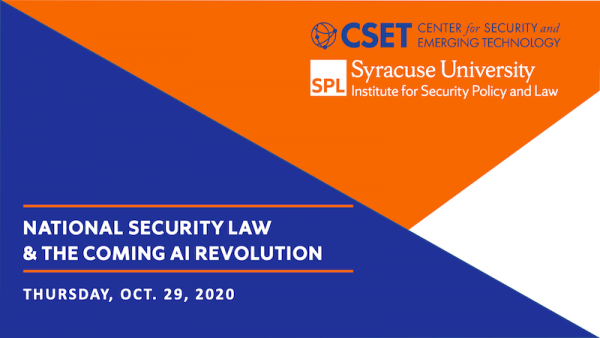