In 2015 Syracuse University Institute for Security Policy and Law began a collaboration with the NATO Cooperative Cyber Defence Center of Excellence (CCDCOE), based in Tallinn, Estonia.

The authors of the “Tallinn Manual on International Law Applicable to Cyber Warfare,” experts at CCDCOE are at the forefront of understanding the challenges of applying existing international laws and norms to the constantly evolving cyber realm. As the Tallinn Manual project continues, ISPL staff, faculty, and associates have been invited to add their insights into how to reform international law and domestic law in the digital age.

Tallinn Manual 2.0 on the International Law Applicable to Cyber Operations expands on the highly influential first edition by extending its coverage of the international law governing cyber operations to peacetime legal regimes. The product of a three-year follow-on project by a new group of 20 renowned international law experts, it addresses such topics as sovereignty, state responsibility, human rights, and the law of air, space, and the sea.

Tallinn Manual 2.0 identifies 154 ‘black letter’ rules governing cyber operations and provides extensive commentary on each rule. Although Tallinn Manual 2.0 represents the views of the experts in their personal capacity, the project benefitted from the unofficial input of many states and over 50 peer reviewers. 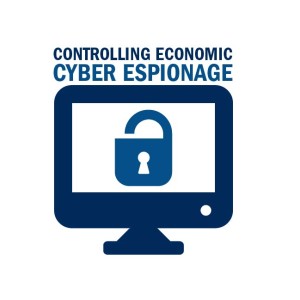 Contemporary cyber spies—often under the control of nation states—are just as likely to be plundering the intellectual property and customer information of international businesses as waging covert cyberwar against military enemies. Yet legal, policy, and technological means for countering cyber espionage are not always clear.

“Who is doing the spying and by what methods? What is the current thinking of government and industry about the problem? And what methods of protection—such as identity assurance—currently exist?”

In order to examine the state of domestic and international approaches for controlling—and to offer recommendations for policymakers and practitioners who are addressing—this postmodern form of economic, military, and industrial spying, ISPL joined with the NATO Cooperative Cyber Defence Center of Excellence (CCDCOE) to host “Controlling Economic Cyber Espionage,” an interdisciplinary workshop held at SU College of Law on June 18 and 19, 2015.

The workshop convened cyber experts from around the globe, including:

Panels asked who is doing the spying and by what methods, what is the current thinking of government and industry about the problem, and what methods of protection—such as identity assurance—currently exist? The workshop also analyzed the domestic and international law and policy landscape to ascertain what reforms and actions are necessary as cyber espionage—and cyber war in general—evolves. Answers were drawn from the disciplines of foreign and domestic law, public policy, international affairs, defense strategy, law enforcement, computer engineering, and finance.

Tallinn Manual 2.0 on the International Law Applicable to Cyber Operations

On Feb. 7, 2017, the Texas Law Review hosted the symposium “Tallinn Manual 2.0 on the International Law Applicable to Cyber Operations,” co-sponsored by the Robert Strauss Center for International Security and Law and the Lieber Institute for Law & Land Warfare at the United States Military Academy.

Panel 3: Responding to Cyber Operations Not Amounting to an Armed Attack under Article 51

A guest of professors William Snyder and Lee McKnight and their Cybersecurity Law and Policy/Information Security Policy class, ISPL alumnus Siim Alatalu (MAIR ’06) spoke about NATO, cyber attacks and cyberwar, and international policy and cooperation at SU College of Law on Oct. 24, 2016. Alatalu is an international relations advisor at ISPL partner the NATO Cooperative Cyber Defense Centre of Excellence (CCDCOE).

In February 2016, the Strauss Center at the University of Texas-Austin hosted a conference on the legal and policy dimensions of cybersecurity. Sponsors were the Christian Science Monitor, the American Journal of Criminal Law, and with the ABA Standing Committee on Law and National Security.

Topics included the aftermath of the “going dark” debate; the evolving regulatory environment for the security/research sector; export controls; “active defense” of networks (including “hackbacks” and “botnet takedowns”).

KEYNOTE DIALOGUE: “Reform of the MLAT Process with Respect to Data Held Abroad”

Recording of transatlantic dialogue with counterparts in Berlin for an episode of the America Abroad Media radio documentary series.

SESSION 3: “Hacking Back and Other Active Defense Measures”

SESSION 3: “Cyber in the Business and Regulatory Contexts”

SESSIONS 4 AND 5: “Cyber, International Law, and the Laws of War” 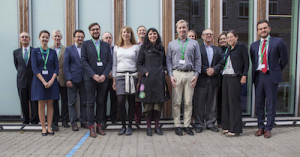 The continuing, rapid development of online technologies, while offering unprecedented opportunities for individuals and groups to exercise the freedom of expression, can easily lead to human rights infringements.

“Law is playing catch-up with technology and nations are running the risk of undermining human rights instead of strengthening them.”

In October 2015, lawyers and legal scholars from governments, academia, and NGOs gathered in Tallinn, Estonia, to discuss the future of human rights in cyberspace, in a workshop hosted by the NATO Cooperative Cyber Defence Centre of Excellence (CCDCOE) and co-sponsored by the Institute for National Security and Counterterrorism at SU (ISPL). Specifically, esteemed delegates at “Human Rights in Cyberspace” focused on how to apply the long-established principles of international human rights law to rapid technological developments and on the balance between free expression and law enforcement in a realm that is increasingly borderless, expansive, and chaotic.

In introducing the workshop, Lorena Trinberg, a legal researcher at CCDCOE, emphasized that governmental cyber measures need to be in line with human rights norms and that “law is playing catch-up with technology and nations are running the risk of undermining human rights instead of strengthening them.”

“The Internet provides new means for enabling governmental privacy intrusions and causing national security and economic harm. At the same time it gives states tools to keep tabs on different actors,” explained Professor William C. Banks, Dean of SU Law and ISPL Founding Director. “International law should and will have an important role to play in bringing some order, predictability, and stability to these aspects of the cyber domain.”

“The Internet presents unprecedented challenges to human rights through cyberattacks and surveillance. It also functions as a platform for crime and incitement of violence through hate speech and recruitment to terrorism,” said visiting Professor Gabor Rona of the Benjamin N. Cardozo School of Law and the former International Legal Director of Human Rights First. “States are drawn between obligations to ensure privacy and free expression online while having to police the Internet for human rights violations, such as incitement to hate crimes, fraud, child pornography, and threats to national security.”

Part A of this report provides a brief overview on the workshop’s main topics. The workshop begun with evolutionary aspects of the cyber realm and human rights, and continued with debates on specific problems, such as the extraterritorial application of human rights treaties and an intriguing debate on future developments in cyber law. Part B offers the event agenda, while Part C features presentation abstracts and biographies of the speakers and other project principals. State Responsibility to Respect, Protect, and Fulfill Human Rights Obligations in Cyberspace

In this article, Gabor Rona and Lauren Aarons explore how international human rights law applies to cyberspace. They address the substantive obligations of the state responsibility to respect, ensure, and promote human rights in cyberspace, including protecting against third party abuse and providing remedies for violations. Finally, the authors outline the limitations of and permissible restrictions on human rights obligations in cyberspace. Law Enforcement Access to Data Across Borders: The Evolving Human Rights Issues

Jennifer Daskal describes the challenges facing law enforcement access to data across borders and examines the legal and political issues at stake in formulating clear standards for cross-border access to data.

The guide was developed by SU students and alumni across the iSchool, Maxwell School, and College of Law, on behalf of the IRPC and the UN Internet Governance Forum, with a lead role taken by ISPL alumnus Kevin Risser (MPA ’16; CAS in Security Studies) and by ISPL Affiliated Faculty Member Lee McKnight.